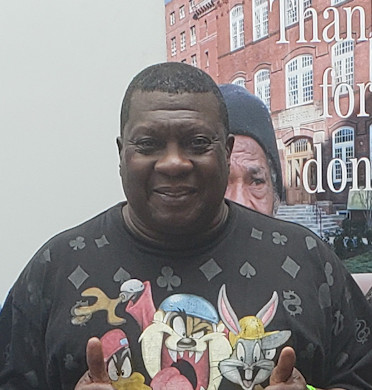 Sitting in the day-room in the basement of Central Union Mission, a few men gather to catch up on the news of the day. Today’s television coverage relates to the stimulus check scheduled to go out to millions of Americans. For men living at the shelter, “you’ve got to know who’s who,” says Paul Brown who has been at the Mission since November 2019 and served in the Marines for eight years. “There are guys who talk about doing things, and you know they’re just blowing smoke–then there are the guys who mean business, and that’s who Johnny is.”

Johnny Ferguson, honorably discharged from the US Army, arrived at the Mission in November of 2019. Immediately he took the initiative to connect with the Mission’s Senior Director of Social Work Shirley Johnson, who drove him and four other veterans to the Veterans Resource Fair. There they were given suits and shoes for interviews and assigned a case worker along with other support services. As a result of his follow-through, Mr. Ferguson leaves the shelter this morning to do a final walk-through and pick up the keys to his new apartment.

Sitting in the chapel later, Mr. Brown smiles as he reflects, “You just know when Johnny says he’s gonna to do something he’s gonna do it.” “So when we all heard about the stimulus money we began to wonder about who was eligible and what the amount would be. Johnny was the one who went online and did the research; he let us know we were eligible as long as we had filed our taxes, which we all had done. See, this is what we veterans do. We follow the rules and do what is expected–the military teaches us that kind of discipline and follow-through.”

Of course, there were those who had lofty aspirations for how to spend their money, Some of the guys said they would pay off a bill or child support–“we all knew who was serious about that,” Paul chuckles. Otis Thorne, a returning citizen, notes, “All of this is what we learn in Dr. Ako’s class and from other staff at the Mission: the importance of setting up and maintaining checking and savings accounts. In our MBI class with Dr. Ako, it’s about us being accountable to ourselves and each other—we encourage and lift each other up.” MBI Health psychologist Dr. Ako Tabetah, who is co-located at Central Union Mission, is their on-site group facilitator who covers a broad range of topics from anxiety and depression to life skills and financial literacy.

Mr. Brown continues, “The majority of the guys thought about how they could use this money as a lump-sum blessing that would give us a boost.” Mr. Brown recalls, “For me, that’s how I see it. I hate the virus thing that is upon us. I really do—all of us do. It has affected a lot of people. But this stimulus check is truly a blessing because it will help me realize one of my goals.” For Brown, Ferguson, Thorne and other men at the Mission, this stimulus check is a way to save and achieve more quickly a long-time goal–to move out of the shelter, rent an apartment, buy furniture and establish a home so they can be self-sufficient. This payment potentially puts them and others ahead in their savings plans.

“I can see the light at the end of the tunnel, and I see that all that I have prayed for is possible and will soon be my reality,” says Mr. Brown. For Mr. Ferguson, the stimulus will enable him to replenish his bank account after having just paid a large deposit, including the first and last month’s rent. “Now, I will be able to have an emergency cushion—that’s my blessing fund.”