Hotels sit vacant during the pandemic. But some locals don’t want homeless people moving in.

Home > Who We Are > News > Media Coverage > Hotels sit vacant during the pandemic. But some locals don’t want homeless people moving in.

Hotels sit vacant during the pandemic. But some locals don’t want homeless people moving in.

As the coronavirus spreads among the homeless in San Francisco and New York, advocates are trying to prevent outbreaks in smaller cities by moving people out of crowded shelters. But they are running into resistance.

As the coronavirus continues to spread across the U.S., advocates fear an outbreak could decimate one of the nation’s most vulnerable populations: the homeless. (Drea Cornejo, Jonathan Baran/The Washington Post)

By Tracy Jan and Jenna Johnson

When a homeless shelter in northern Kentucky closed because it could not safely house people under social distancing guidelines, local officials arranged for residents to sleep at a convention center. But it soon became clear that the coronavirus could still spread in such an environment, so shelter director Kim Webb — like her counterparts in dozens of cities nationwide — looked to book hotel rooms for those needing a temporary home.

Webb, the executive director of Emergency Shelter of Northern Kentucky, and other advocates arranged to pay a Springhill Suites hotel in Florence, Ky., to house 40 people for the month of April — only to have the mayor object.

“In the middle of a pandemic — as we’re trying to drop 50 or 60 or 70 thousand dollars to put Kentucky residents in hotels — we get the door slammed and told, ‘There’s zoning issues or there’ll be code issues,’ ” Webb said. “If we can’t rally around people in a pandemic, my concern is: Are we prepared for what’s coming?”

Homeless shelters are at greater risk of outbreaks because of dangerous overcrowding, advocates say, with people in many cases sleeping on cots or in bunk beds spaced less than two feet apart. But local officials and residents in a handful communities from New England to California have resisted using vacant hotels to house them.

In San Francisco, where Mayor London Breed initially pushed back against the idea of moving homeless people into hotels and instead proposed housing them in the massive Moscone Center, at least 70 people in the city’s largest shelter have tested positive for covid-19.

Outbreaks among the homeless population are also occurring in New York, which was slow to move people into hotels, said Diane Yentel, president and chief executive of the National Low Income Housing Coalition. She fears that smaller communities that have resisted using hotels to ease crowding at homeless shelters will also experience a similar rapid spread of the highly contagious respiratory disease among their most vulnerable populations. 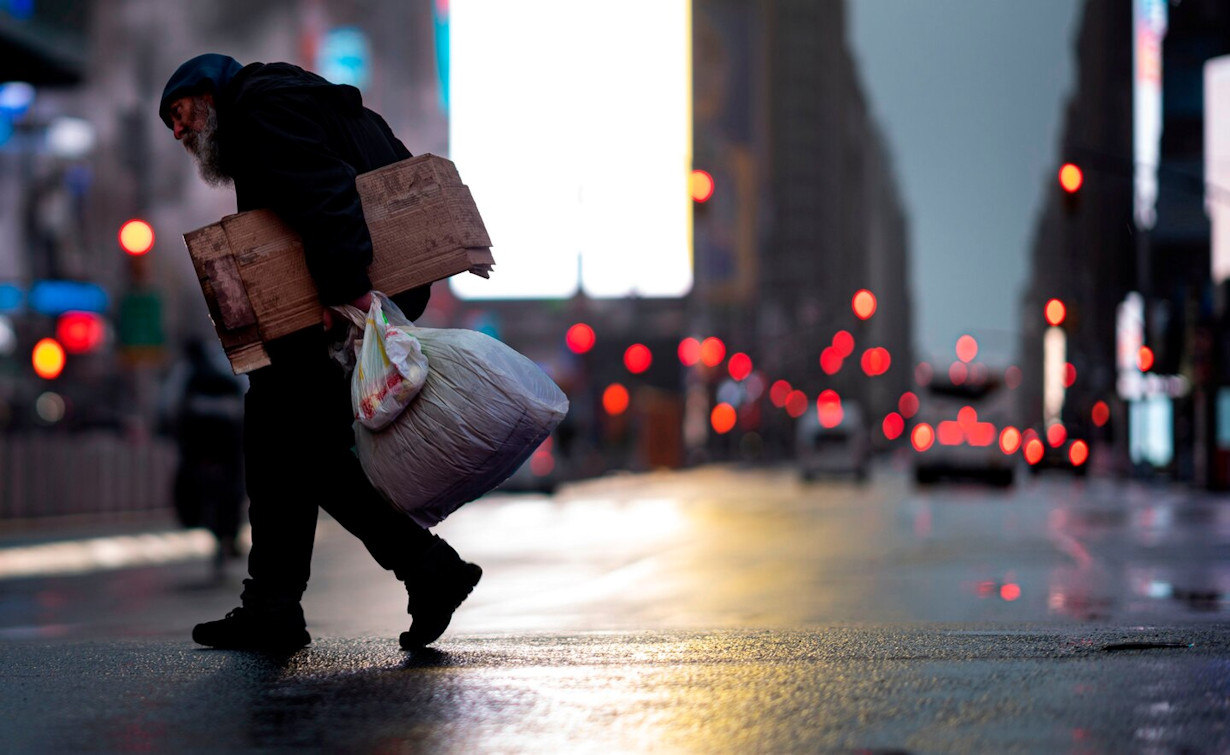 A homeless man carries cardboard as he crosses the almost deserted Times Square in New York on Monday. (Johannes Eisele/Afp Via Getty Images)

In addition to overcrowding, homeless Americans are considered particularly vulnerable to the coronavirus because they typically have underlying health conditions and lack access to medical care.

A recent study estimated that the pandemic would probably result in more than 21,000 hospitalizations and 3,400 deaths among the country’s homeless population.

Advocates say the use of hotels to reduce crowding could save lives — not only of those who are homeless, but in the rest of the community.

“I would hope most communities would see this kind of arrangement as something they could do to help deal with a very serious problem,” said Steve Berg, vice president of programs and policy at the National Alliance to End Homelessness.

To cushion the financial burden, the $2 trillion coronavirus relief package includes $4 billion in emergency services grants to house homeless people temporarily in vacant hotels and motels. Some states, including California and Connecticut, can use disaster assistance money from the Federal Emergency Management Agency to pay hotel costs.

In Florence, Ky., which is south of Cincinnati and home to a number of hotels that have been largely vacant for weeks, Webb had sought to use private donations to house homeless people in a hotel.

Fears mount about impact of coronavirus on homeless

But Florence Mayor Diane Whalen said the plan to move homeless people across county lines was formed without notifying the city. So was a previous move of about 100 people, including Ohio residents, into a Microtel in Florence, she said.

“There was no conversation at all,” said Whalen, who notified hotel owners that they could be in violation of zoning ordinances. “You can’t make decisions that directly impact my community without including us on the front end.”

Whalen noted Kentucky Gov. Andy Beshear’s (D) executive order limiting interstate travel and her concern that moving people into Florence would increase the chances of spreading the coronavirus within her community. “Who would be ensuring that they are self-quarantining and sheltering at home?” she said.

Whalen said she would consider temporarily adjusting the zoning code to accommodate homeless people in hotels, but the Springhill Suites canceled the contract and Webb found another location.

Housing advocates in Connecticut trying to move 1,100 people from 60 homeless shelters — about half their population — into 800 to 900 hotel rooms also encountered resistance from West Haven Mayor Nancy R. Rossi.

“Every other mayor understood what we’re trying to do, but she didn’t want New Haven to dump its homeless population into West Haven,” said Richard Cho, chief executive of Connecticut Coalition to End Homelessness, who is overseeing the state’s efforts to relieve crowding in its homeless shelters. “Some suburbs want to believe that homelessness is a city problem and don’t want to take responsibility.”

Rossi said the city was “blindsided” by state plans. She said city officials learned of the plan only when they tried to secure a couple of floors at the same Best Western to house paramedics in case they were exposed to the coronavirus and were told by the state that the hotel was to be used to house homeless people instead.

“Under the governor’s executive orders, towns don’t really have any authority to reject this,” Cho said. “We’re racing to get ahead of an outbreak. Homeless shelters could become a tinderbox in terms of rapid spread of the outbreaks.”

Cho said Rossi is cooperating after pressure from state and local officials. But the town is taking in far fewer people from New Haven shelters — 56 instead of 96.

The remaining rooms will be reserved for the local West Haven homeless population of about 40, which Rossi said she is trying to relocate from city streets.

Cho said some hotel owners have also been hesitant to house homeless people because they are concerned about damages and the possibility of turning hotels into hospitals.

Pushback against housing homeless people in hotels also occurred in Plymouth, Mass., where a hotel owner and town officials opposed plans to quarantine homeless people who fell ill with the coronavirus in a Best Western.

Residents of a gated retirement community in Orange County’s Laguna Woods protested plans to temporarily house homeless people at the nearby Ayres Hotel, prompting the boutique hotel to cancel the lease with the Board of Supervisors.

“My greatest fear is that the city cannot move quickly enough to get people off the street to stave off widespread infection and widespread death in this population,” said Kyriell Noon, chief impact officer at the Glide Foundation, a charity helping San Francisco’s homeless. “It wouldn’t take much to tip the whole community over. The sooner we can get folks off the streets and into hotels, the better I think it’s all going to end.”

Andy Lynch, a spokesman for Breed, said the mayor has expressed concern for the city’s homeless residents since the pandemic began.

As of Monday, he said, more than 750 people from San Francisco’s vulnerable populations, including 447 from its homeless shelter system, are being quarantined in hotel rooms.

Jonathan Baran contributed to this report.